Just Call Me the …

… Crazy Caterpillar Lady.  Last summer I was beguiled by baby hummingbirds.  This summer I’ve been captivated by caterpillars and enthralled by stunning Monarch butterflies.  Bringing caterpillars and chrysalides home have had a domino-effect of complementary activities: 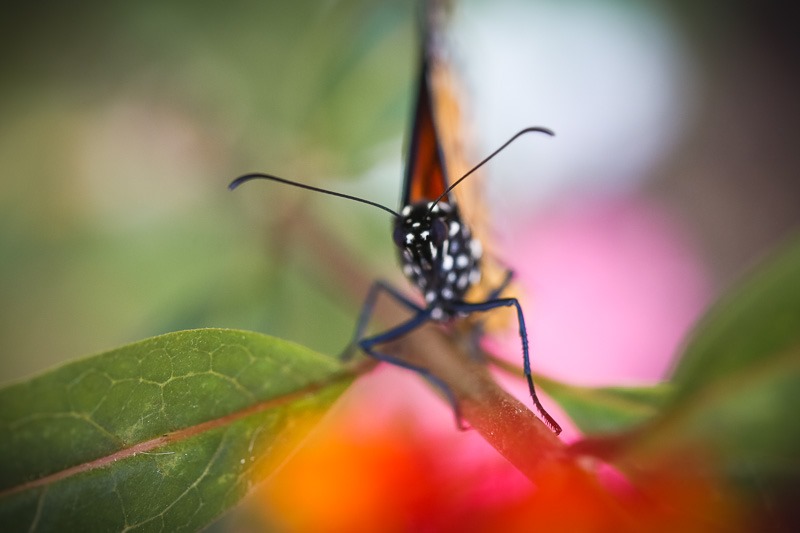 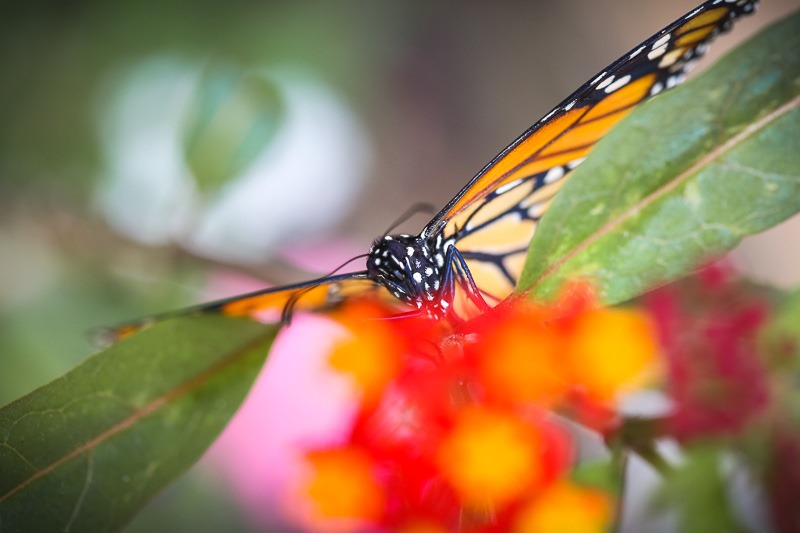 I’ve bought & planted milkweed.  And I’ve grown/planted milkweed from cuttings.
Helpful links:  http://www.monarchwatch.org/milkweed/prop.htm
https://monarchbutterflygarden.net/grow-from-cuttings/
I’ve released my baby butterflies in the backyard – had them dry their new wings – on the milkweed I planted.  They’ve laid lots of eggs! 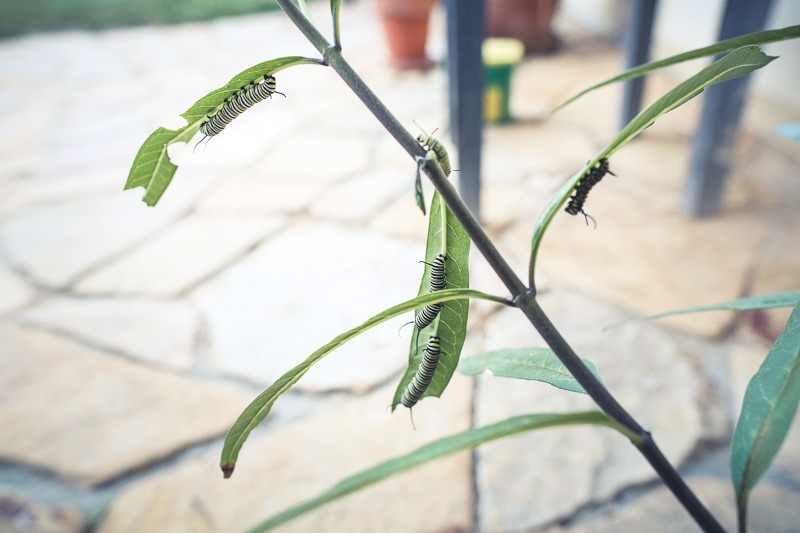 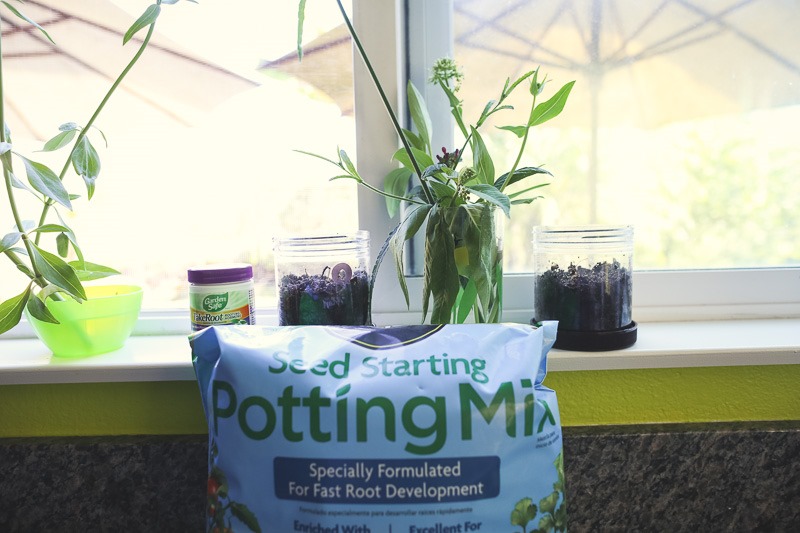 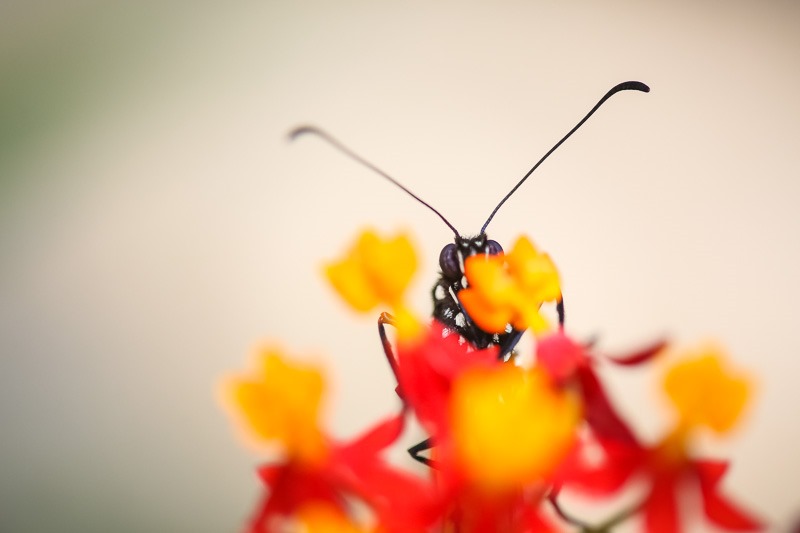 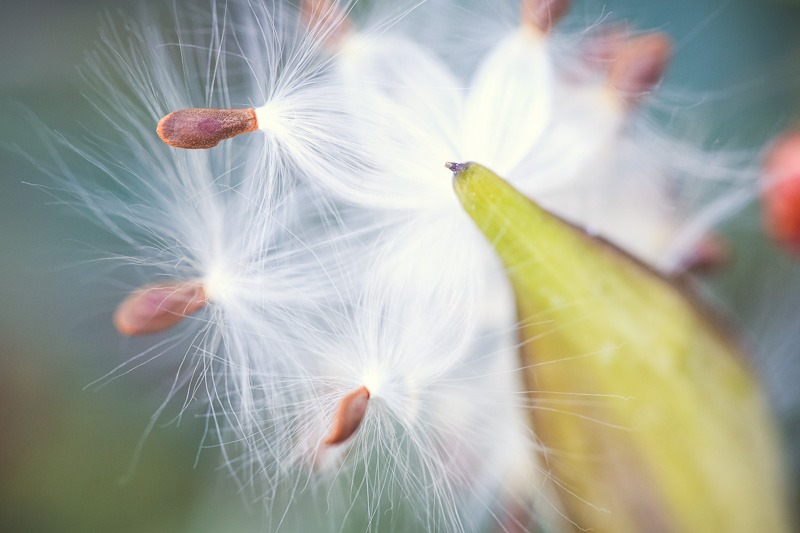 The last milkweed cutting I brought home apparently had butterfly eggs on it, as baby caterpillars showed up about a week later.  So yesterday I decided to go ahead and build a cheap domicile for them… (btw, all thanks to Anita for this geniously inexpensive and easy-to-make caterpillar habitat!)
Helpful link: http://forums.gardenweb.com/discussions/1786871/homemade-rearing-eclosing-cage 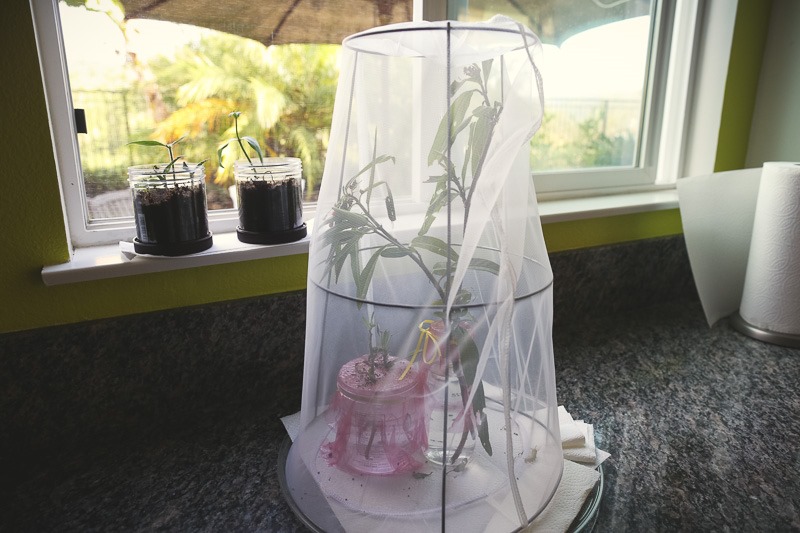 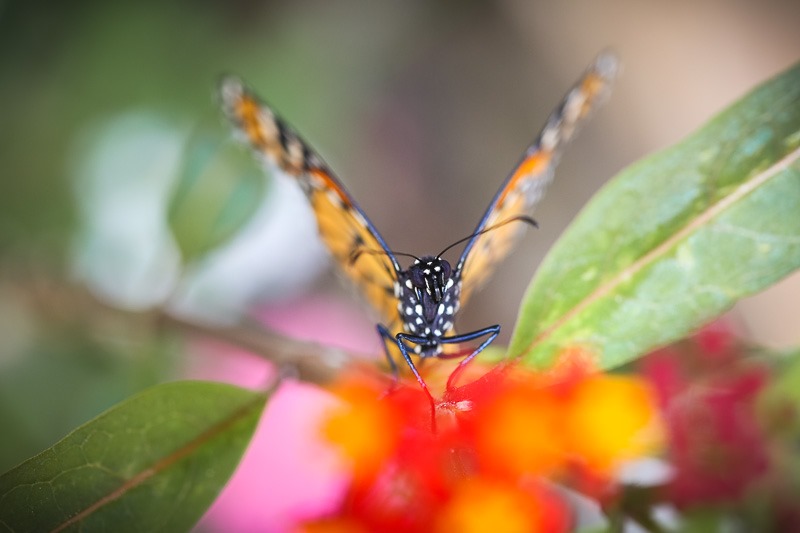 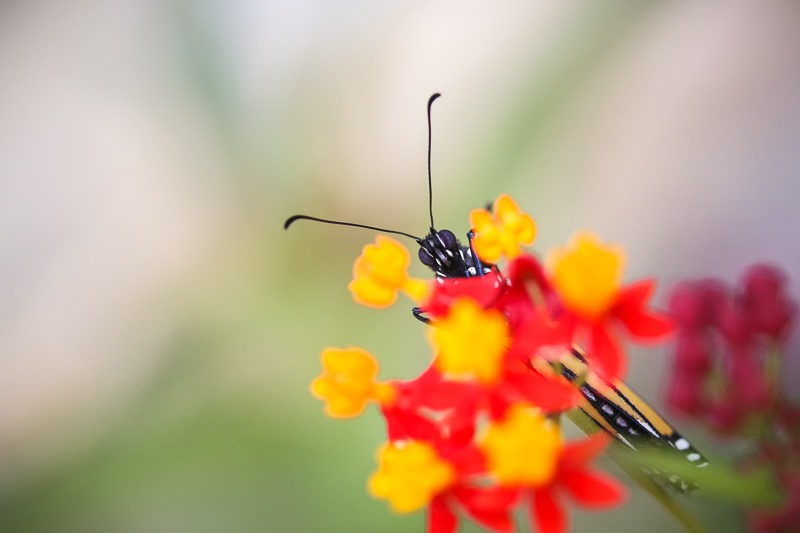 There.  Hopefully, I’ve remembered & listed all the helpful sites, so I can easily find them again after I forget all this :-p.
Posted by Skeller 4 comments:

Emma by Jane Austen - fun to read this right on the heals of Anna Karenina, two books about two flawed female characters. lots of compare & contrast going on in my head. two thumbs up for Emma. And then I watched the movie; Gwyneth Paltrow was a perfect Emma.

Slaughterhouse Five by Kurt Vonnegut - postmodern, sci-fi-outerspace time-travel, war ("anti") story told all out of sequence because, don't you know, everything is happening all at the same time continuously ad nauseum. So, y'know, not my usual literary fare. And I can't say I exactly liked or enjoyed it. But I liked/enjoyed parts of it. Some of the scathing/satiric commentary amused me and/or made me think. The narrative voice seemed authentic to me - almost Hemingway-esque, only without feeling like he was trying so hard (like Hemingway always seems to me). Glad I read it, glad it was short.

Fixer-Upper by Mary Kay Andrews - I wanted a light summer read. MKA books were recommended. Let's just call them what they are: chick lit. I picked up three at the library. But after skimming my way thru Fixer-Upper, the other two were returned unread.

Honey for a Teen's Heart by Gladys Hunt - such a great resource book list. Nevermind what I have to say about it; Heidi at Mt. Hope Chronicles already said it well.  Oh, and I totally get that books are a somewhat subjective experience.  And I'm perhaps a little bit opinionated.  So I simply crossed off the books (on the various lists) I didn't personally like and penciled in ones I loved that weren't mentioned. :-)  'Cuz that's how I roll.

Lucy Maud Montgomery Short Stories 1907-1908 (free, Kindle) - For the record, Ann of Green Gables is one of my favorite books ever. But these short stories are just ok. It's a stretch for me to acknowledge that LM Montgomery authored both. Despite being 30-something when she wrote these short stories, they read like the slightly-angsty melodramatic or syrupy sweet fluff of a teenage mind. That said, they were a nice piece of "candy" to consume before turning off the lights at night.

A Long Walk to Water by Linda Sue Park - not too long ago, we Kellers watched The Good Lie (which was excellent), a movie about four of the "Lost Boys" of Sudan who came to America to rebuild their lives. This book could be the prequel to the movie. Based on a true story, sparsely written (elementary level - tho not in any way simplistically condescending in tone), this is an important narrative. I liked it and passed it on to Big Dude. He read & liked it. We'll be having the dudes all read it. May we never again take clean water for granted. Highly recommended - read the book and then watch The Good Lie.

A Single Shard by Linda Sue Park - a 2002 Newbery winner for excellence in children's literature.  set in 12th century Korea, about an orphan boy apprenticing himself to a master potter, about hard work, perseverance, honoring others, seeking perfection slowly, learning truths & lessons thru stories.  I kinda loved it.

The Innocence of Father Brown by G.K. Chesterton - these are kind of delightful just-before-bed short-sleuthing-stories.  For a bit of flavor, here's Father Brown explaining to another "priest" how he identified him as a fake:

“How in blazes do you know all these horrors?” cried Flambeau.
The shadow of a smile crossed the round, simple face of his clerical opponent.
“Oh, by being a celibate simpleton [Flambeau's earlier words], I suppose,” he said. “Has it never struck you that a man who does next to nothing but hear men’s real sins is not likely to be wholly unaware of human evil?  But, as a matter of fact, another part of my trade, too, made me sure you weren’t a priest.”
“What?” asked the thief, almost gaping.
“You attacked reason,” said Father Brown. “It’s bad theology.”

Katherine Paterson - picked up three of her books (YA) at the library. The King's Equal - cute, enjoyable, short fairytale. And two of her [what I'll call] walk-in-someone-else's-shoes-and-feel-empathy books: The Great Gilly Hopkins (life's up & downs thru the eyes of a feisty foster child) & Lyddie (a farmer girl's experience as she leaves home and siblings to work long hours in a textile mill/factory in the mid-1800s). All three were excellent. I'll probably eventually read all of Paterson's books. 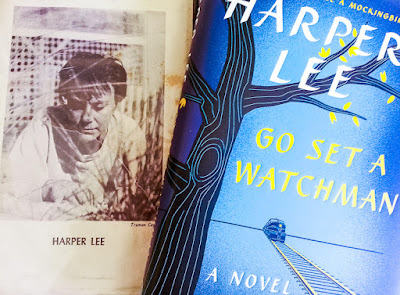 TKAM (book club selection, plus we're following hard on its heals with Go Set a Watchman - a book club first: reading a newly published novel.)  this was my 3rd or 4th reading of TKAM.  Love it still.  Whether Go Watch is a keeper or not (truth be told, I really don't think Harper Lee ever had any intention of publishing this after publishing TKAM), nothing will shake my reverence for TKAM.  If you haven't ever read To Kill a Mockingbird, do so.  Our book club was unanimous (which is rare for us!!) in giving thumbs up approval.

Go Set a Watchman by Harper Lee (book club) - so many thoughts.  Firstly, I'm fully on Team-Harper-Lee-is-being-exploited.  I don't believe she meant this to be published.  My opinion is based on giving weight to her 50-year  stance of not publishing a second book, when she's always known of the first book she wrote.  That said, now that the book has been published (regardless of her wishes), wild horses couldn't keep me away from it.  Here are a bunch of my disconnected thoughts.  Firstly, I love Scout still.   I'm so glad I got an extra peek into her life, voice, worldview.  Uncle Jack was a pleasure to meet in greater depth.  I read Atticus with TKAM Atticus fully informing my view of him.  GSAW's Atticus's anti-integration stance did not necessarily seem inconsistent to me with his TKAM self.  I totally missed some of the beloved characters from TKAM.  I totally got a kick out of seeing some of Lee's GSAW verbiage lifted verbatim and plopped right into TKAM.  I love the way Lee writes, and I don't think GSAW discredits her.  I do think it reads as a mere draft, and some parts are downright clunky.  But some parts - so beautiful.  Some parts - so over my head; I'm going to have to re-read a couple scenes (specifically between Scout & Uncle Jack) and research some of the historical and literature references to come to a fuller understanding of their conversation & meaning.  And, I don't know how many times I've read a good book that has the germs of a GREAT BOOK in it, and I've mourned for the lack of editorial insight to hone in and edit out and guide better - in short, to take the time to labor & create a better work.  Clearly, Harper Lee had such an editor for GSAW, and TKAM is the masterpiece that rose from the ashes.  Oh, for more of such editors today!


The Life-Changing Magic of Tidying Up by Marie Kondo - I work from home. Big Dude works from home. We school from home. We've got STUFF everywhere, and I'm feeling claustrophobically motivated to declutter massively. I borrowed a copy of Marie Kondo's runaway bestseller manifesto on decluttering thinking it might inspire serious action. But I don't know if it's her Shinto worldview & habit of animating & bestowing emotions & opinions on inanimate objects, or if it's that Japanese culture and American culture are THAT different, or if it was the harsh stance she took against books (throw them out, but if you have to keep them, at least put the bookshelf in the closet and close the door. as if.), but I found this book to be 90% pure nonsense. But there was that 1% commonsense genius that gave me the enlightened impetus to be aggressive in my purging when she asked if I wanted to live in a [peaceful, decluttered, lovely] home or one that resembles a storage shed? So I'm moving STUFF on out. (But I'm keeping my books. However, goodbye & good riddance, Magic Treehouse; the dudes have outgrown you.)  But enough about me.  What about the book?  There's about 5 pages (max) of to-dos that boil down to: gather all similar items in one place at one time (in the categories of, in this order: clothes, books, papers, miscellany, mementos/pictures). If the item doesn't bring you joy or isn't necessary, purge. The End. The rest of her book is stuff about your shoes needing to rest because they work hard for you all day, and socks should never be balled because then they roll around and bump into each other and hurt each other. And after you've achieved tidy perfection you will lose weight, find your true purpose in life, and experience good fortune.


Notes from the Tilt-a-Whirl by N.D. Wilson - I'm not usually a non-fictiony or essay reader.  And this is both.  It's a whole bunch of essays that puzzle-pieced-together render a beautiful whole.  Wilson's writing seems to me to be a modern version of C.S. Lewis or G.K. Chesterton, humor intact.  His essays concern the wonder and weirdness and artfulness of creation; theology, philosophy, science, human observation are all on the table. I'm reading an essay or two at a time, but when done, I'll likely go back and reread/skim the whole at one time. 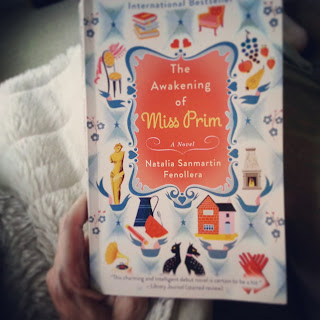 The Awakening of Miss Prim by Natalia Sanmartin Fenollera - You know how there are those few books that you're so sad when you get to the end - not because of a sad ending, but just because you're sad the book ended?  This book was one of those.  Delightful from beginning to end.  I wanted ever so much more time with these characters and their stories.  Fingers crossed for a sequel.  I'd write more, but Heidi at Mt. Hope Chronicles already did so.  (ps. Heidi is one of my best sources for fabulous books.)

Posted by Skeller No comments: